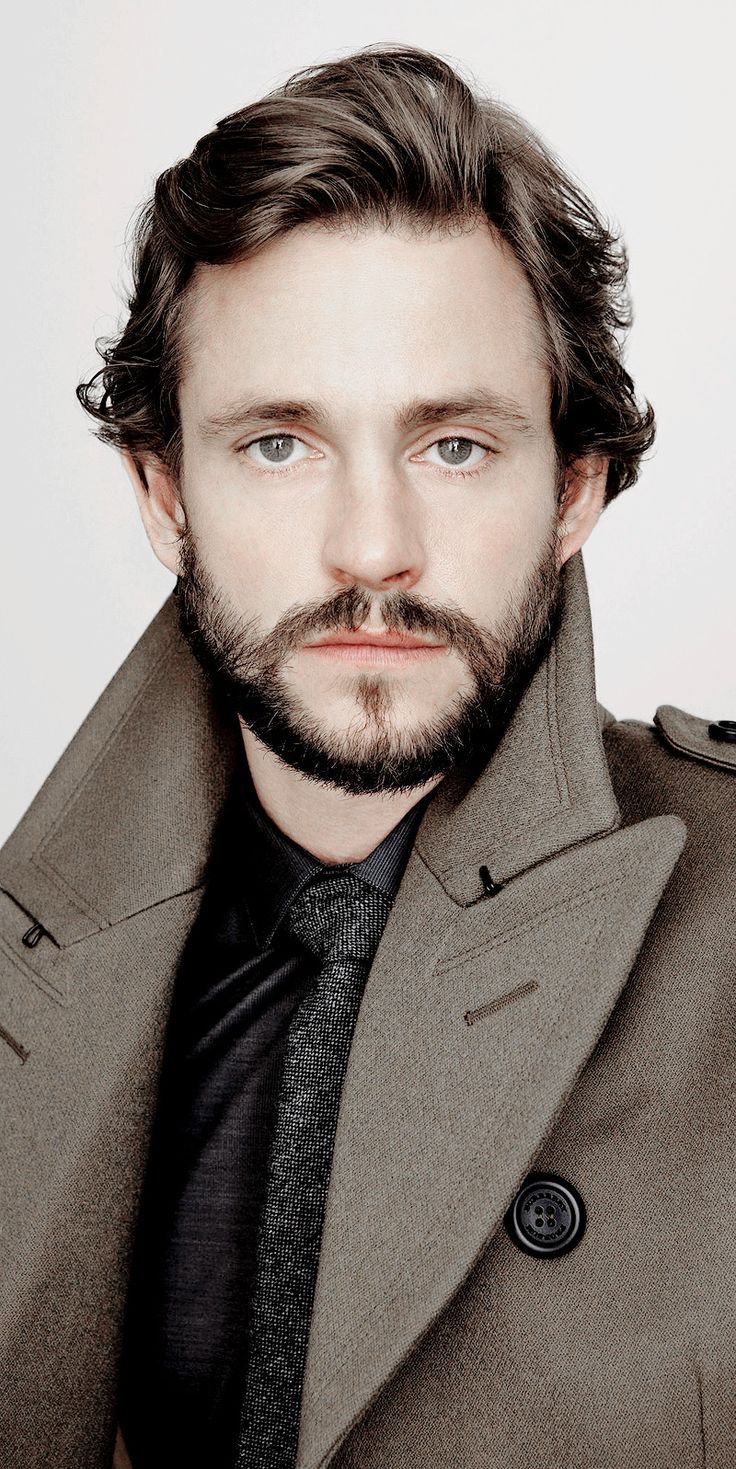 There's no one actor in particular that I want to model my career after, except for the people who have been able to keep their career varied and who choose things that interest them.

That opportunity is all I really want. I was sent under duress and never left, I loved it. To begin with I was just helping out with the sets, painting the walls, nailing things into the floor and doing odd jobs.

I was sent there to keep out of trouble, but I never thought about acting before that at all.

Then I discovered I liked the people doing drama far more than most of the other people at my school. I spent so much time there that eventually someone asked me to be in a play, it had nothing whatsoever to do with my acting ability.

I found out that I loved acting and I am very glad it happened. If something like ["The Pride" play ] comes up and it's a great character, I'll want to do it.

Basically, I'll ask myself, what are the reasons I shouldn't do this? And when you look around and you realize you can't really find any, then you have to do it.

I will go into a book shop Chemistry is essentially the result of good writing and good acting. Obviously, it's easier to act with somebody you respond to and get on with and if you like the way they think.

But I've acted with people I didn't particularly get along with. And nonetheless, I've produced perfectly good chemistry on screen.

And I know there are plenty of examples of people working together and falling madly in love and producing complete rubbish.

There's a tipping point where three or four guys or women are in a particularly visible series at one moment, and it's like, 'Oh, my God, the Brits are invading,' but we've always been around.

You can hypothesize as to why people hire us or why they don't, but I haven't heard of any theory that holds water.

I don't have any aspirations to be a leading man in the Hollywood sense. You have to be very specifically ambitious to be bankable in that way; to have a studio sign off on you, which is an entirely different thing from being good.

I like a bit of anxiety in my life. I don't like feeling complacent and I'm capable of being a bit doom-laden. Living in this moment in America, it's hard not to feel like you are potentially at the edge of a complete precipice.

I suppose part of my brain is vulnerable to apocalyptic thinking: 'Oh God, climate change, economic collapse, class warfare', but then the other 99 per cent of the time I'm just going about my business and I don't see the world that way at all.

I think I'm as contented as I could be given who I am. There's a strange expectation now that you should, but choosing to produce or direct doesn't suddenly give you control of your career.

I could sit there and write a great script but it doesn't mean anybody's going to make it. And I don't need to be stinking rich.

I don't think I'm any more insecure than the next person. I try not to let myself become too neurotic. To some extent, paranoia in this industry is just a realistic outlook, it comes with the territory, but I try not to drive myself totally insane.

My parents have always supported me, so I was never waiting in fear for the day when they would call up and order me to get a proper job.

Well, I mean, at least he knows what he's talking about, and he's a great director, so if he says something like that, then thank you very much.

Leo's a brilliant actor, so it's very flattering, but you can't really take these comparisons too seriously. I'm still trying to figure out what I can do well and what I can't.

There's only so many New people you can be before people give up. So I did say to Claire 'Look, stop telling me about it'.

Terrible policy for a marriage Now I read the scripts as they come out. And it is hard to do that and be interesting and create something big.

I know from experience, and watching her now on set, that she is fantastic to work with, generous without trying to be generous.

Or at least I don't. And I don't do it religiously; sometimes the moment passes - I think there's still some episodes of Hannibal I haven't watched because you were there.

But most of Hannibal and The Path , I really wanted to watch because in each case there are such specific tones that you're going for, and I felt like the opportunity for failure was quite high because with anything that's aiming for a particular pitch, you can step off that fine line quite easily in any direction.

The doubting part of me assumed that I would spend my career playing posh characters in costume dramas. At least one casting director told me bluntly that that's what I'd be doing, so get used to it.

If an actor is gay, then they are a "gay actor". It's not like being a blond actor or a very short actor - those things can be dealt with in people's imaginations.

And there is this strange cultural obsession, this eagerness to unmask people. I just can't bring myself to care very much.

It's a kind of self-preservation: you cannot hope to control what other people think or say about you. There are so many scripts where they don't allow the male lead any kind of flaw, which renders it very boring.

Not something I've ever experienced before. And I found it to be thrilling and very, very rewarding. And I think we were all very cognizant of that all the way through.

You know, you always worry a little bit when you see somebody that's got a tattoo of something you're involved in - you think, 'Really?

But look, it will always be dear and important to me so I'm glad that it was shared. I used to reassure myself by counting up the money I could have made from movies I turned down that I knew I shouldn't have done, sort of imagining some alternative universe version of myself who was richer but less satisfied.

I went to boarding school and, at 13, I was sent to theatre studies as a punishment for smoking and drinking. That formed my decision to become an actor.

But I did go to uni first. That said, I think because a lot of the movies and TV that we're exposed to in England are American, we grow up with that noise in our heads, but you could approach that lazily as well.

There is a sort of relaxing of the mouth that results in a strange pseudo-American, pseudo East-Anglican drawl.

That said, I do think it's easier going in the other direction moving from an English accent to an American accent. It's a lot easier to soften up your consonants than tighten them.

There's also less tonal range. You tend to be But you ride the waves of things that are coming to you as long as they're interesting. It's not like, 'At last I'm being taken seriously!

It's just, 'Oh, you think I can do that? I'll try that. I used to feel more that way - that's a quintessential actor's feeling - but I still feel the challenge of wanting to do justice to richly thought-out material.

And in some ways it's like a badge of honor. I actually think that the one thing we don't do is desensitize violence. And actually another thing - we don't casually or predominantly inflict violence, in particular sexual violence, on women.

Our show is equal opportunity. So, sure, don't watch. But for me, there are other culprits more worthy of censure.

We were in Dublin for 6 months and my memory is patchy, but the one thing I definitely took away was that I'd want to work with him again with fewer horses and more acting.

I've followed his career since and for me, he's one of the best screen actors working anywhere. So the chance to sit opposite him and knock Bryan's [Fuller] dialogue back and forth was incredible.

He came onto the show after me and I was basically checking my emails every five minutes hoping it would work out. I was working on a job quite a few years ago now and suddenly was quite daunted - it was something I'd wanted for a long time and found myself there, looked around the other cast members, and they were all pretty substantial people - I was speaking to my father and running through that litany of anxiety, and he said basically, 'Isn't that exactly what you want?

It feels very bittersweet - we don't know what the future of the show is, or if there is a future for the show, but I don't expect to have an experience of this nature for a long time, if ever again.

That's no bad thing, it's just because it's been so profound. I've done my fair share of light comedies, which I also love.

I think there's a good example of every kind of story: horror, comedy, farce - you name it, and basically I want to be in all of them - the good ones.

How you assess that, that's a little bit more complicated. But I mean - it gets to the point you want to have a break, maybe from murdering people - but I've got there yet.

I'm not the kind of actor that goes home and has to wrestle with my demons if I've been playing a troubled guy during the day.

I have absolutely no passion for modeling. Christopher [Bailey, the creative director of Burberry] is one of my dear friends, and I don't want to be casually dismissive of the entire industry at all.

That whole experience confronted my expectations of fashion a little bit. I was surrounded by people - Mario Testino , Kate Moss - who were at the top of their profession, and who I found to be charming and genuinely creative.

Not superficial. Not bitchy. Not any of those easy stereotypes. But the actual act of sitting in front of a camera, while fun for a day, would not sustain me.

I could bore you to tears about a lot of fairly arcane subjects, like the reign of Elizabeth I, or the history of Rwanda, or the day-to-day conditions of an officer in the First World War.

But you have to be careful. Sometimes you can overestimate how much people really care. I'm not "the grass is greener", but if I'm doing one thing, I'll always fantasize about doing the opposite.

So if I'm in a play, I'll dream about doing a film. That sort of thing. If I'm anywhere else in the world, I'll wish I was in London.

There are people who are obsessive about theater, any kind of theater, and God love them. They'll come five, ten times if the play is successful, and then will address what even to you, who has done the play a hundred times, seems like the most obscure, astonishingly irrelevant point, and want to hammer it out in the street.

When you're starting out as an actor, 50 percent of it is the way you present yourself. I thought I'd missed a bit in the script where the courtroom went on fire.

Someone gave me a pat on the head and told to me to carry on pretending for a living. Share this page:. Sundance Trending Names.

Favorite Actors. My favourite actors. Do you have a demo reel? Add it to your IMDbPage. How Much Have You Seen? How much of Hugh Dancy's work have you seen?